View cart “夢遊病者 (Sleepwalker) – Ѫ (Yus) LP” has been added to your cart.

Beastial Majesty – The Night Of The Hunter 7″

A new entry into the shadowy realm of the Ordo Vampyr Orientis, BEASTIAL MAJESTY’s lycanthropic blend of black and death metal offers a complement to drummer The Impaler’s more thoughtful and grating compositions in fellow OVO artist BAT MAGIC. Pummeling and low-end-heavy, their debut 7″ EP The Night of the Hunter‘s dense, overwrought take on black/death metal fusion concentrates on each half’s strengths instead of choosing one and filling in the proverbial blanks with the other. As a consequence, BEASTIAL MAJESTY’s grasps of the ignorant and the majestic are equal and parallel, bolstering their stylistic companion with an extra bit of muscle lacking from most of their genre peers.

All instruments and vocals performed by:
The Unsightly
The Unbound

Drums performed by The Impaler 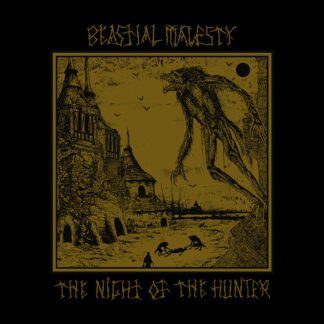