HISTORY:
Blasphemous mag (english written) was released in the early 90s with these 2 issues featuring lot of the bands that marked the scene of death metal and early black metal. Used the layout and technics that most early publications had that period, cut ‘n paste, typewriter, photo collages.

A true glance into the past. Identify the purity of the bands in their beginning, the freshness of their words and ambitions in their early steps!

Each issue of course is filled with the usual “Reviews” section and there is an extra section on each one with “Views on the Occult”.

PRESENT:
In the book you will find the new prologue written by The Magushimself describing that period:
“…..late ‘80s-early 90’s. The golden era of the second wave of black metal. The age where extreme music was a never-ending storm of releases. When genres were formed and bands , which are now huge, were releasing demos. The time where music mattered and everyone was trying to find its own style, to walk its own dark path…”

Blasphemous was restored from original copies, not heavy manipulated in order to keep this underground feeling of the xeroxed original print.

Blasphemous cover logo was redesigned, keeping all the original elements, by the mighty Christophe Szpajdel (Lord of the Logos)  and Tolis Yovanitis made lettering on the cover, index and editorial. 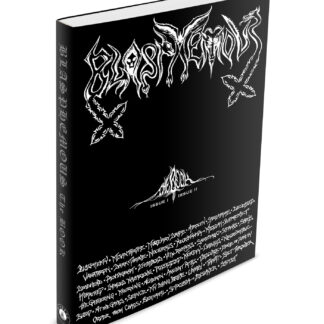