Northern trees sometimes bear strange fruit. Arising from the shadow of mental institutions and personal secret corners comes the Norwegian Urarv (“Ancient Heritage”), the new project spearheaded by avant-metal stalwart Björn Aldrahn Dencker of DHG and The Deathtrip and Thorns fame. “The ideas and visions for Urarv started actually back in 2003 during a stay that I had at the local mental institution where I live,” comments Aldrahn. “It began dawning on me one evening as I was locked out on to the perimeter of the facilities to have a stroll.”

At first, Urarv was going to be a folkish song-oriented solo-project exclusively, but as time went by, those thoughts proved themselves to be much too dysfunctional, and in the end, it would take several years until it all began taking shape properly. It wasn’t until the summer of 2013, however, when enough material for a full-length album was ready. From thereon, Aldrahn sought out for fellow musicians to join his escapade of sonar expedition and relinquishment of artistic restraints. He was lucky enough to find two excellent creatures to do the drums and bass. Patricia and Sturt joined in with great enthusiasm and conviction when rehearsals began taking place later that year.

While Urarv recognizes the ancient heritage of Norwegian black metal, it also tramples across limitations. At the core of the project lies the idea of experimentation with various unorthodox tunings and curious sounds. “We want to tap into uncharted territories to see what lies hidden under the rocks and dead horses and beneath the cold vastness of uncertainty,” says Aldrahn. “We’re traveling to remote regions of metal music and mental space with this music. Although our message is one of emotional putrefaction, we want to help listeners find a way through the black hole.” 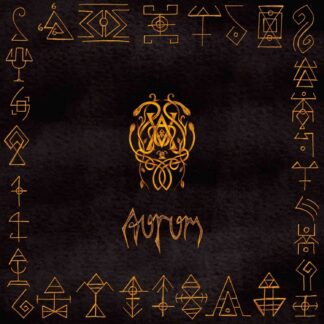 You're viewing: Urarv – Aurum LP € 11,40
Select options
No shipping from December 12 until January 9