DUE TO A PRODUCTION ISSUE, WE HAVE TO SHIP THE CD’S BACK TO THE PLANT TO HAVE THE DIGIPAKS REPRINTED AND REPACKED.

FREJA are a duo hailing from the Netherlands, consisting of C. (Witte Wieven) and W. (Laster, Verval). The two found each other musically during the lead-up to Roadburn 2019 while working on the commissioned piece Maalstroom – a veritable “supergroup” of the ever-thriving Dutch black metal scene, including members from the esteemed likes of Fluisteraars, Turia, Terzij de Horde, Verwoed, and Grey Aura among others – and they decided to continue that creative energy with FREJA.

Tides is FREJA’s first public recording, and a more auspicious debut one will not find. The duo’s shared interest in atmospheric metal is immediately reflected in FREJA’s towers of sound, built upon layers of dense-yet-spacious riffs, subtly shimmering melodies, and plausibly catchy compositions which include themes that evolve throughout each of the album’s six songs. Thundering, crushing, almost inescapably so? Yes, but also immensely ethereal and sometimes as smooth as gossamer, creating a paradoxically levitation aspect that effortlessly carries the listener through these Tides.

Part and parcel of Tides’ sonics are the album’s strident lyrical themes. Inspired by persistent energies from ancient myths – like the symbol of the goddess Freja – to cope with the complex emotions and struggles of modern life, the dance of this duo sparks the force of creation.

Furthering that duality is FREJA’s instrumental makeup, with both C. and W. equally handling clean and harsh vocals, spanning the entire sonic spectrum with dazzling depth. Amazingly, the entire writing & recording process for Tides took only a year, with the recording & mix handled by the band themselves mastering done by Joris Bonis from Dodecahedron/Ulsect. Completing the album’s totality is the cover painting exclusively done by Johan Prenger of Reflections Records.

Calamitous and cleansing and cathartic above all, Tides takes conceptions of “atmosphere” and “black metal” itself in widescreen new directions. FREJA defy conventional genre categories, and instead stoke the fire of potential in us all. 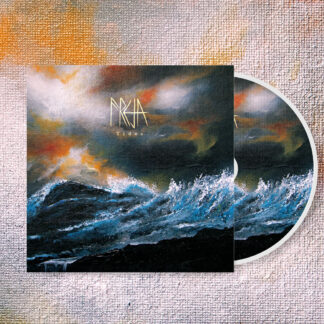