It makes a difference in effort and time, either to dig six feet deep or to build Necropolis.

VENENUM decided for the latter… and it was worth every fucking second of wait. 5 years after the successful s/t minialbum, VENENUM strike with their debut full-length entitled “Trance of Death”.  The album presents VENENUM on a new level of brutality and contains new & never before heard layers of darkness.  The six new compositions + introduction-theme are a grand melt of unique visions and unaltered tradition, weaved & merged into a complex unit of sacred horror.

Trance of Death is far away from being another onedimensional tribute to the grave… it is reverence & praise, a hymn to the impending end of all things. Twisting & turning, up & down, back & forth, entangling songs and parts evolve in a constant flow. Trance of Death is the most serious approach towards creating a soundtrack to Death.

Join a 50 min ride through the deepest depths of ripping death, the wildest wastelands of abominable black and the darkest peaks of sinister rock. or to be plain: on the A-side they kill, on the B-side you die.

High-class songwriting skills, supremely possessed execution & performance. And a top-notch production will catapult this album to one of the most signifying & relevant releases in 2017. Both immensely beautiful and intensely terrifying, this release will easily open the doors to the death metal pantheon for VENENUM. 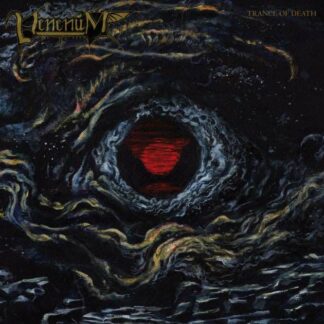 You're viewing: Venenum – Trance of Death LP € 18,00
Add to cart
No shipping from December 12 until January 9